This is from a message I sent to a friend last week: 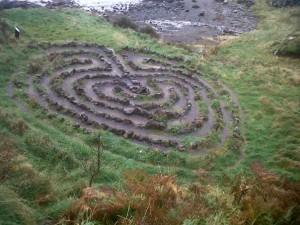 “The big realisation I got this morning was just how much is encoded in Woman and specifically what is encoded in me.  It’s almost as if it can only be unlocked/uncoded at that point of sacred union, when a man and a woman who are both evolved fully meet. This meeting/sacred union may be in lovemaking or it may be ‘simply’ energetic, ie involving no physical contact between the two.   And I’m not even sure if it is possible yet – whether either men or women are anywhere close to evolved enough.”

When I went to the temples in Malta for the first time in 2010 I connected strongly back into the archetype of the priestess.  And at that time my attention was drawn very strongly to the use of menstrual blood and it felt very important for me to understand the function and capacity of menstrual blood in ceremony and ritual.   (I wrote about this in my blog on www.reclaimingdelphi.com/2012/11/reclaiming-delphi).  When I returned to the Maltese temples the following year I connected and asked them what I needed to hear.  They told me that it was about the unity of man and woman, that they had never been built only for the god or the goddess, or the man or the woman separately, but they had been built for the Unity of the Whole.  And I felt the importance of sacred union in its true form, or the sacred sexual rituals which were performed in the temples and that they must be reclaimed.  There were sacred rituals involving lovemaking in those temples when they were in right use of power.  And now the message feels that this is how that right use of power can be reclaimed.

At the end of April and the beginning of May, at the time of the Celtic festival of Beltane, which is the festival that celebrates fertility, traditionally by lovemaking between the May Queen and the Green Man, I will be sharing that celebration with the people of Massachusetts (probably not with actual lovemaking ;o) ).  These Sabbats or Celtic festivals have been woven into the land here in Scotland and held there until their time has come round again.  I have really been feeling the call of the earth and all that is held in her – this feels like another sort of encoding.

I think there are men and women who have the capacity to understand this work and to support this reclamation, but I’m not sure how many, if any, are ready yet.   I have gone there with men who have not been ready and they have been terrified.  And they have only seen glimpses.  It’s for this reason that I have consciously chosen celibacy and not to go into lovemaking with another person.  I feel that the earth being is able to engage my energy, but at this time I have yet to meet a human being with that capacity.